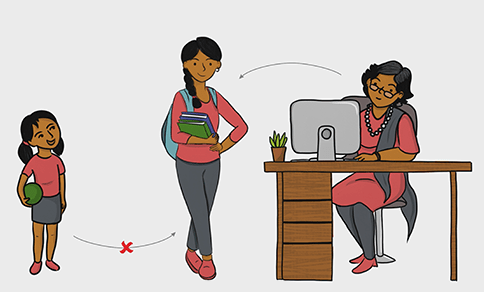 Adults often tackle adolescent behaviours with a perspective that adolescents are moody, rebellious, and unruly children. However, adolescence is a transitory phase towards adulthood and behaviours that were once mysteries can now be explained scientifically. This article aims to provide an understanding of how the adolescent brain develops and functions, the behaviours that manifest, and factors that may create a negative long-term impact – this will allow us to create better learning opportunities for them and to address their issues. It is the collective responsibility of parents, teachers and the community to help adolescents navigate from being dependent on their caregivers during their childhood to become independent adults.

Why talk about adolescents in India?

As defined by the United Nations, adolescents are those between ages 10 and 19 which numbers to 1.2 billion individuals in the world today, of which a little over 6% (i.e. 75.5 million) reside in India1. However, due to earlier onset of puberty and delayed timing of role transitions, for example – completion of education, marriage, and parenthood – there is a shift in popular perceptions of when adolescence ends. With recent developments and understanding of the brain, some researchers today have proposed that those in the age group of 10-24 should be considered as adolescents2. With this new proposed definition, India has the world’s largest adolescent population at 368 million

The number of adolescents in India alone is massive, but what does adolescence mean apart from the defined age group? Adolescence is a crucial period in an individual’s life during which different biological, psychological and environmental factors influence their behaviour and development outcomes1, having a lasting impact on their adulthood. Shifts in hormones lead to not only physical changes but is also a factor in the development of certain parts and structures of the brain that are responsible for decision-making, emotional processing and forming social relationships.

Today, adolescents are also vulnerable to “falling out” of the system by either dropping out of school, engaging in criminal activity or being more prone to mental illnesses. In order to tackle these issues, it is first important for us to understand why adolescents behave the way they do.

Some of the most apparent changes that adults observe in most children as they become adolescents are that they begin acting rebelliously, spend too much time with friends instead of studying and engage in dangerous situations. Among the many behaviour changes that have been noted for teens, the three that are most robustly seen across cultures are increased novelty-seeking, increased risk-taking and a social affiliation shift toward peer-based interactions1. While these behaviours may lead to danger, they are important in fostering the development and acquisition of independent survival skills. In order to make sense of adolescent behaviour, it is essential to understand the changes that take place in their brain.

The adolescent brain, still in the developmental phase, shows high ‘plasticity’ as compared to adults which means that the brain is capable of forming rapid neural connections that are responsible for learning and developing new skills. The more frequently these connections are used (i.e. a particular activity is repeated), the stronger they become.

Similarly, the lesser the connections are used, the weaker they become and are eventually erased1. This process, also referred to as ‘pruning by the brain’, makes adolescence a very vulnerable phase in life as new behaviours are very easily learned and unlearned.2 This vulnerability exposes adolescents to the risks of picking up and cementing negative behaviours that eventually affect their adult lives. However, it also provides an opportunity for adults to develop positive behaviours, skills and abilities in them.

The prefrontal cortex in the brain responsible for functions like working memory, self-regulation and impulse control is not fully developed in adolescents1. They are also unable to gauge the long-term consequences of their actions and focus on the satisfaction of immediate rewards, thereby increasing the tendency of risk-taking behaviour. This gets further activated in the presence of peers as the brain’s reward system is heightened in anticipation of the rewards.

Even sleep patterns change during adolescence

Most adolescents prefer sleeping late at night and consequently wake up late. This is due to the delay in the production of melatonin (the hormone responsible for controlling sleep cycles) in adolescents by about three hours as compared to adults1. Due to easy access to and higher use of laptops and mobile phones before sleeping, adolescents are exposed to bright light and loud noises which act as strong stimuli to the brain preventing them from sleeping soundly. Reduced sleep and fatigue affect the decision-making capacity of the prefrontal cortex and also elevate any pre-existing stress2 further affecting their academic performance and productivity.

Conflicts and communication issues at home can have a negative impact

The quality of relationships of adolescents with their parents, the amount of control parents exert on the different aspects of the lives of their adolescent children and individual traits of parents developed over time have a considerable effect on adolescent behavior. For example, if adolescents are exposed to continuous conflicts between their parents and have no channels of communication, it can lead to grave consequences such as display of aggressive behaviour or dropping out of school.

Adolescents’ relationship with the media can be complex

With globalization and a rise in exposure to different mediums such as television, films, print media, it has become difficult to control the quality of content that is consumed by adolescents. Behavioural traits such as aggression, using abusive language and getting addicted to smoking, alcohol or tobacco can be easily picked up by adolescents through movies1. Film and television content mostly portrays men and women in conventional and stereotypical gender roles. Adolescents might inculcate the same values failing to develop healthy gender-sensitive adult relationships that foster equality.

Stressful situations impede the functioning of the brain

If adolescents face constant stressful situations, it can lead to mental health issues like anxiety and depression. Prolonged stress also affects the structure of the prefrontal cortex causing the dendrites1 to shrink and impairs their functioning2. These structural changes that take place in the adolescent brain can last for longer durations as compared to similar changes that take place in the adult brain due to exposure to stress3. However, these effects are not permanent and can be reversed if appropriate and timely measures are taken.

Exposure to substances early on can lead to addiction

In a 30-year prospective study, researchers found that around 50% of adolescents who were exposed to alcohol and drugs prior to age 15 faced an increased risk of developing an addiction as adults in spite of having no history of behavioural problems1. Adolescents are prone to alcohol, drug and other substance addiction due to their tendency to take risks and higher ability of the adolescent brain to form faster neural connections to accommodate the excess dopamine2 released upon consumption of addictive substances. They develop a higher tolerance towards addictive substances due to repeated use and become extremely dependent on them to generate feelings of happiness. Apart from traditional addictive substances, the internet is also rapidly turning into an addiction among adolescents due to overuse of social media and continuous online gaming, online chatting and watching videos.

The onset of mental health issues can take root during adolescence

According to research, around 50% of the mental health problems onset before the age of 141. Anxiety is one of the most common mental health problems that can manifest during adolescence and can turn into more serious problems if ignored. A large-scale study on mental health problems conducted in the year 2007 in India showed that around 26% adolescents in the age group of 13-15 years in India suffered from anxiety and loneliness and reported that they have developed no close friendships. It was found that one out of four adolescents in the age group of 13-15 years in India felt depressed3. These problems can arise due to various reasons like environmental factors, peer pressure, increased stress due to competition in school, difficulties in adapting to the physical and emotional changes that take place during adolescence or conflicts at home.

A nurturing support system needs to be created

Given the gravity of the issues that could potentially manifest during adolescence, it is important to support adolescents in this phase through collaboration. Bringing entities that directly impact adolescents such as teachers, parents and the government together will bring in sustainable, systemic and societal change.

Collective culture is a typical characteristic of Indian families where decisions are taken together with a high degree of cohesiveness. Research shows that greater support for mental health problems is provided in joint families due to increased interdependence and interpersonal relationships. However, traditional joint families are now increasingly being replaced by nuclear families comprising only of parents and their children. With this change in family structure over the years, interdependence among family members seems to have reduced2. This can also have an impact on the support received by adolescents at home.

2. Introducing neuro-scientific concepts in the classroom

Apart from parents, adolescents spend the maximum amount of time in school with their teachers. Therefore, teachers have the opportunity to influence adolescent behaviours to a great extent. Equipping them with neuro-scientific knowledge about adolescent brain development through professional development programs helps them design better classroom lessons tailored to meet adolescents’ needs1. Understanding why adolescents behave the way they do would also help teachers in being more empathetic towards their students. Every school should also have trained counsellors who know how to tackle adolescent issues, especially problems related to mental health.

3. Helping adolescents discover more about themselves

In the 21st century, having crucial life skills1 is essential to cope with challenges and grow as an individual. For adolescents, development of life skills is even more important as they begin to form an identity, deal with pressure, and seek risks.

Having life skills as part of the school curriculum is necessary. It has shown a positive impact on students not only across the world but also in India. A study was conducted in K3. Helping adolescents discover more about themselvesarnataka to compare the impact of life skills education on a sample group of 605 secondary school students and control group of 423 secondary school students, along with interviews conducted with approximately 100 educators. The students who had received life skills education had significantly better self-esteem, perceived adequate coping, better adjustment generally, specifically with teachers, in school, and prosocial behaviour1.

Learn more about SAF’s solution to working with adolescents in secondary education at scale here.
References

Previous Post Counselling students: Creating a new system vs. leveraging an existing one
Next Post Trapped in the Internet: How does this new-age addiction work?

Trapped in the Internet: How does this new-age addiction work?