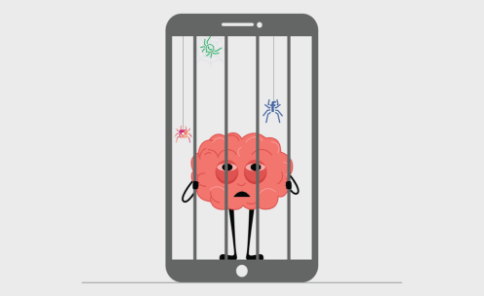 In April, two adolescents studying in grades 9 and 10 from Nizamuddin, Delhi and Malkajgiri, Telangana committed suicide after being reportedly scolded by their parents for playing Player Unknowns Battle Ground (PUBG) Mobile1.  There are have countless cases such as this over the past year. These instances are just at the very tip of the iceberg when one begins to analyze the extent to which “internet addiction” can negatively impact an adolescent child’s brain, psychological health and have a ripple effect on their lives.

This isn’t merely an urban problem

According to a recent report, India’s internet users are expected to reach 627 million this year1. While a major share of these users are urban, the year-on-year increase in number of internet users is primarily driven by rural areas. It is hence unsurprising that increasing number of adolescents are also getting access to mobile phones, and that it is not a purely urban phenomenon.

While research studies have established “internet addiction” (henceforth referred to as IA) as a major concern area, it is still early in the field of research to have a standard worldwide accepted definition of the term. This term was first coined in 1996, when researcher Dr. Kimberly Young came across a 43-year-old homemaker who, prior to using the internet felt content with life, and on using the internet started reporting feelings of depression, anxiety and irritability when she was not online.

According to Young, “internet addiction is an impulse control disorder that does not involve an intoxicant”

1. Other researchers defined IA as, “overuse of the internet leading to impairment of an individual’s psychological state (mental and emotional) as well as their scholastic or occupational and social interactions”

2. For the purpose of this article, we’ll define internet addiction as “an impulse control disorder that involves obsessive usage of the internet leading to negative mental and emotional consequences in the user’s life”.

In adolescents IA manifests itself in different forms such as spending too much time on online gaming, social media, watching videos, online chatting, etc.

It is important to first understand how the process of addiction works. Dopamine1 is released when we anticipate feelings of pleasure before doing a particular activity, which in turn motivates us to engage in that activity. When an adolescent consumes an addictive substance for the first time, it is coded as a pleasurable activity in the brain. Hence, the mere thought of consuming it again releases dopamine, thereby motivating him or her to consume it frequently to seek pleasure.

The adolescent brain undergoes the same changes in the case of IA. Research shows that the dopamine released when adolescents play games online is in similar proportion to the dopamine released when they consume harmful addictive substances. Research has also shown that the density of white matter in the brain responsible for important functions such as decision making, regulating behaviour and emotions is affected due to constant online gaming.

IA is damaging to both psychological and physical health of adolescents

Human beings have an inherent desire to belong; when socially rejected, it causes us pain. With the advent of social media, adolescents have begun relying on approval from peers online and instant gratification rather than relying on real-life experiences leading to negative psychological effects.

1,185 children in the age group of 8-16 years were interviewed in major Indian cities (Mumbai, Pune, Bangalore,Chennai, and Hyderabad) in 2015 to understand the effect social media has on their behaviors1. It was found that around 43% of children who use social media have observed harsh behaviour of people being mean and harassing each other on these platforms. Furthermore, around 52% reported that they had engaged in bullying activities on these platforms.

Adolescents who are addicted to social media can also develop feelings of inferiority or superiority over time if they start comparing their own lives with the virtual lives of their friends causing long-lasting damage to their
self-esteem.

Continuous online chatting and gaming prevents adolescents from developing interpersonal skills. A study conducted among 884 adolescents in Canada between March 2001 to May 2002 found that those who engaged in chatting with strangers online and frequently played online games experienced a decline in the quality of their pre-existing
friendships and relationships1. This is true even for adolescents who spend excessive time watching educational videos online or seek entertainment on the internet, which leads to losing out on real-life experiences of forming social connections.

Excessive time spent online on laptops or smartphones also has a detrimental effect on adolescents’ sleep patterns. Adolescents tend to sleep late and wake up late affecting their activities during the daytime. Disturbed sleep patterns can also affect how adolescents perform at school and may lead to depression and substance abuse.

In a recent study, children self-reported that they experienced symptoms like headaches, poor appetite, feeling tired and problems with their eyes when they use the internet and experienced aggressive feelings along with trouble sleeping well at night.

If an adolescent shows severe addiction symptoms, she or he can be treated with the help of professional counseling. Furthermore, exclusive programs for de-addiction can now be accessed in many places in India. The National Institute of Mental Health and Neurosciences located in Bangalore, India have a SHUT (Services for Healthy use of Technology)
clinic which is exclusively meant for those addicted to cell phones, internet, television etc. The Center for Children in Internet and Technology Distress is another clinic in Delhi that provides assistance to children
addicted to the internet in developing self-control and using internet in a regulated way.

However, recovery rates of treating addictions is extremely low. According to evidence gathered by Lance Dodes, ‘Alcoholics Anonymous’1 (one of the largest associations to help members recover from alcohol addiction), has only a 5-10% percent recovery success rate2. Therefore, it is important to understand how to prevent IA.

Positive discipline set by the family as a whole and values that are mutually agreed upon with adolescents can be effective in reducing internet use and screen-time significantly. Some strategies include:

Teachers and parents should encourage adolescents to engage in more real-life experiences that involve interaction with peers and group activities based on their interests. This will lead to not only better mental and physical health of the adolescent, but will also equip them to deal with messy emotions.

Adolescents should also be taught healthy coping strategies to process their thoughts and emotional stress to avoid treating the internet as an escape from reality. They should also be encouraged to have regular sleep schedules and to eat right at appropriate hours. Teachers can also arrange sessions in the school to educate students about IA and equip them with strategies to deal with addiction.

Technology giants Google, Apple and a few others, have come up with special applications to keep a track of screen-time which give detailed information about the number of hours spent online based on the user’s online activities1. An Android app called ‘Digital Well-being’, launched by Google to help users in controlling the time spent online, helps users see how many times they have checked their phone, how many notifications have been received and how frequently different apps are used by users. A number of other applications and tools have also been designed for parents to keep a check on the internet usage of their children and to block certain games or applications to prevent children from accessing them. However, there is still room for further action to ensure safety of adolescents in the virtual world.

Find out how severely addicted you are to the Internet

Take a look at which statements apply to you. The more statements you identify with, the more severe your addiction is.

If you have any queries, feel free to write to social@safindia.org.

Previous Post From post-childhood to pre-adulthood: Changing how we perceive adolescence
Next Post Government: Partners in creating sustainable change

From “post-childhood” to “pre-adulthood”: Changing how we perceive adolescence